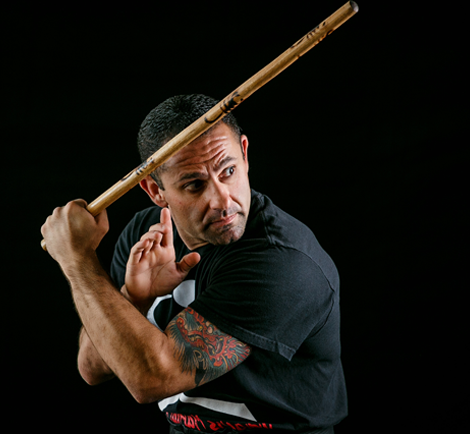 Mr. Shervin Ilbeig’s history in martial arts started when he was around 3 years old. Young Mr. Shervin would imitate Bruce Lee’s moves and sounds. When he was 14 years old his older brother Joubin took him to a Kung Fu studio in Santa Monica off the 405 freeway. Mr. Shervin felt right at home! He studied the basics of Kung Fu for a year and he was forced to stop going because of the move his family had to make to the Sanfernando Valley. In 1991 Mr. Shervin was then introduced to the art of Hapkido at Team Karate Centers. Mr. Fariborz Azhakh was one of Mr. Shervin’s first instructors and taught Mr. Shervin a lot about life! Mr. Shervin earned his first degree black belt in 1994 and has been teaching martial arts since.

Currently Mr. Shervin is studying under world class Masters and Grand Masters of the Martial Arts on a weekly basis.

In 2002 Mr. Shervin received his Bachelors Degree in Information Technology from University of Phoenix. He had the choice of working in the IT field or starting his own martial arts program. Mr. Shervin chose his joy “teaching”. Little Dragons Karate was started in January of 2004 with only 23 students. At the end of 2004 year Mr. Shervin’s student count was tripled, and currently Mr. Shervin has over 200 active students and is very kind and warm hearted with each student. He knows how to meet every students level of learning, but at the same time makes the students have fun. Mr. Shervin has passed the CA Required CPR & First Aid Class

WHAT PARENTS ARE SAYING

We have been a part of Mr. Shervin’s DMA family for almost 5 years. His talent, gift, and technique when he teaches his classes are fantastic! His staff are experienced and professional. DMA has brought so much into our lives and has been an inspiration to our 9 year old. We will be a part of DMA for a lifetime.

This facility is outstanding. I prefer diamonds over stars. Mr. Shervin is an exceptional instructor. We have trained with him for 10 years. I recommend this studio for all children. Thank you Mr. Shervin.

Mr. Shervin has been my son’s instructor for the past 6 years. Besides absolutely loving what he does, he’s amazing with kids as little as 3 years old, all the way to adults, women and men alike. I’ve watched his classes grow from a small little studio into this large studio that he currently occupies. The volume of students has has amassed is a testament to his incredible teaching. He has watched my own child grow and become respectful, responsible, appreciative and thoughtful, as he has taught other children to be as well. Mr. Shervin gives free women’s’ self defense classes on weekends each year, this year suffering a broken nose at the hands of one woman but continued the class, giving his own body for us to use and practice our defensive skills. Mr. Shervin highly encourages donations of holiday toys to be given to sick children at the Children’s Hospital, participates each spring in a fundraiser for a Rape Treatment Center at the Northridge Hospital including a special performance by he and some of his students, and encourages donations by children by offering a free year of karate classes to the child who raises over $1,000 for the Rape Treatment Center, donates his own money and time to other charities, and gives back to the community way more than ever gets, exemplifying the true spirit of what he teaches. Not to mention he is a fabulous father of 3, with his children attending most classes and his wife working at his studio as well.

If you want to learn martial arts and enjoy the best workout for mind and body. There is no better place than Dragons Martial Arts. If you’re an advanced martial artist and want to learn more and fine tune your art. You will see major gains working with Mr. Shervin. I have trained with Mr Shervin over 16 years and find myself amazed by his teachings and how great a martial artist he is! Constantly growing with the art! Best place on the planet!!